Dr. Lepore and his entire team are certified by the state and have advanced training in several forms of sedation endodontics including: 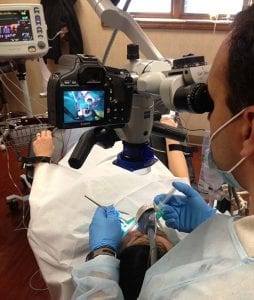 Nitrous Oxide Sedation, often called “laughing gas” is a very effective way for Dr. Lepore to help you stay relaxed and comfortable during a dental procedure. It is a very light form of sedation, which works fast and wears off quickly. During the procedure you will feel extremely relaxed with a sensation that has been described as “dreamy”, but you will remain awake. Once the nitrous oxide is turned off, patients usually feel normal again within minutes and can almost always drive themselves home after the appointment.

For patients who suffer from dental anxiety, fear of pain, gag reflex, as well as those who just don’t like the sounds, smells or sensations of dentistry, in-office IV sedation can be very effective and safe for endodontic and implant procedures.

Unlike general anesthesia, which is also delivered intravenously, IV Sedation in dentistry is a form of Conscious Sedation where the patient is never completely asleep. Rather IV Sedation can be described as a very relaxed sleep-like state.

IV sedation induces a state of deep relaxation and a feeling of not being bothered by what’s going on around you. The drugs used for IV sedation produce either partial or full memory loss (amnesia) for the period of time when the drug first takes effect until it wears off. As a result, time will appear to pass very quickly and you will not recall much of what happened. Many people remember nothing at all.

General Anesthetics is available for patients who want to be “completely out” during dental procedures. This sedation is done in our office under the care of an anesthesiologist.

I want to thank Dr Lepore

I want to thank Dr Lepore and his team again very much for the excellent professional work on my root canals. The best part, I felt NO pain while you did the injections!!

“The Doc and his assistant worked like a choreographed fine tuned team. Quick, attentive, soothing wonderful team. The office was super comfy.”

“Thank you so much for all your time and efforts saving my tooth.”

Thank you for your kindness

“Thank you for your kindness everyone made me feel comfortable and helped to ease my anxiety.”

Thank you so much

“Thank you so much for seeing me on such short notice.”

I want to thank you

“I want to thank you for your professional and personal courtesies that you and your team extended to me during my visit to your office. The whole experience was managed in a very pain free manner. Your willingness to see me and complete the procedure on the spot is really appreciated.”

Just a thank you

“Just a thank you to you and your very kind staff for the wonderful pain free visit on Sept 4 , the fact that you were there for me on a holiday week end was a blessing.”

“Your staff was wonderful –Your assistant was taking such good care of me I thought she was my sister for a time.”

I would not be nervous

“I would not be nervous at all to have this procedure again. Although I hope I don’t.”

This was my first root canal

“This was my first root canal treatment. I will not dread another if Dr Lepore does it.”

“Your personal attention to me as the patient meant everything-very understanding and pleasant attentive it was a great dental experience!”

“Appreciate how quickly I was able to obtain an appointment.”

You guys are really great

“You guys are really great at what you do and I would definitely recommend you.”

I had a wonderful experience

“I had a wonderful experience and I Immediately called my dentist to tell him.”

Everyone was very kind

“Everyone was very kind and patient with me as I was nervous and worked up. Everyone made me feel comfortable. I would send others your way.”

I enjoyed the office staff

“I enjoyed the office staff and the doctor was very professional. My tooth feels good right now thanks!”